He volunteered  in February 1940 and was called up almost immediately.  The Commonweath War Grave Commisson reported his death as being sometime between 07/06/1940 and 18/07/1940.  This report of his death was reported in local newspaper in April 1940.

He is buried at Pornic War Cemetery in Loire-Atlantique, France.

We regret to record the death of Private John Bertram Ecott, R.A.S.C.  He had been posted as missing more than eight months ago, but information has now been received to the effect that he was found dead in the summer of 1940.

He was born 25 years ago, and as a boy attended the Valley School and Aylesbury Road School, afterwards going on to Catford College.  Leaving school, he started as a grocery assistant at F.W. Essex and Son, Bromley, and was afterwards for some years in the employment of Messrs. E. Durrants, 7, the Pantiles, Tunbridge Wells.

He volunteered in February, 1940, for immediate service overseas with the N.A.A.F.T. and was sent to France in March. 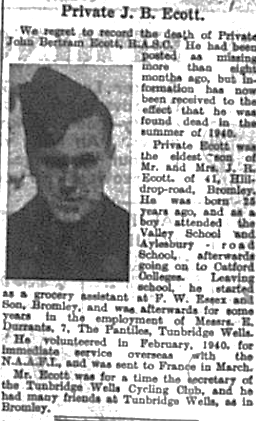