It wasn’t only sons who helped fight the war in WW2.  Many families with girls were also proud of their daughters achievements.  This feature from the Bromley and District Times promotes the efforts of three sisters from Bromley.

Two in A.T.S. and one in Land Army

Many parents speak proudly of their sons in the Forces, but Mr and Mrs G. Durling, of 72 Martins Road, Bromley, are proud of their three daughters in the Services.

Before the war Joan and Dorothy worked at Morris’s of Bromley, and Margaret was manageress of Logan;s, Downham.

All three were connected with the Shortlands Congregational Church  and Y.P.F.

Private Dorothy Durling is hoping that her fiance Andrew, who has been missing since Singapore fell, will come home one day.

The three girls are very happy and the open-air life has benefited each of them.  In fact, they would have been sorry to have missed the opportunity the war gave to them.

Good luck to the Durling sisters! 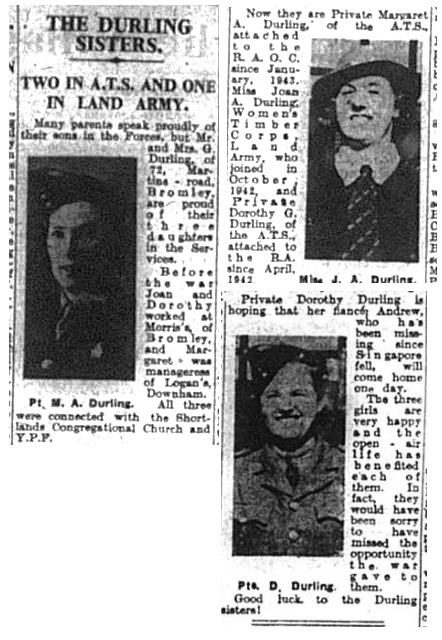