Private Patrick Reynolds had previously been reported as missing in the Bromley & District Times newspaper on the 19th July 1940.  Read article here >

Death of Prisoner of War

Private P.J. Reynolds
Private Patrick J. Reynolds, royal West Kent Regiment, after having been officially reported as missing since May 20, 1940, has now been reported as having died while a prisoner of war.  his parents, Mr and Mrs J.P. Reynolds, of Bickley Crescent, have received official notification to that effect.

Private Reynolds, who was the second son of Mr and Mrs Reynolds, was only 19 years of age when he joined the Territorials in May 1939, who were, of course, mobilised when war broke out in September.

In April of the following year he went to France with the B.E.F., and the last letter his parents had from him was on May 19th – a month later.  A day later he was reported missing and since then there was no further news until this week they were informed of his death.

Private Reynolds was an old boy of Raglan Road School, and prior to the war had been employed by the South Suburban Co-Operative Society at Petts Wood and at Orpington. 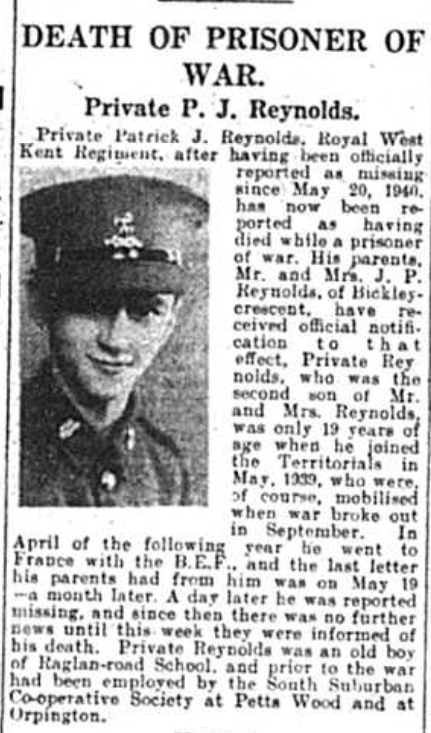