Private Patrick Joseph Reynolds of the Royal West Kent Regiment, was reported as missing in the Bromley & District Times newspaper in 19th July 1940.

After this report it transpires that he became as prisoner of war and was reported as having died 14 months later in October 1941.

Private Patrick J. Reynolds of the Royal West Kent Regiment, second son of Mr & Mrs J.P. Reynolds of Bickley Crescent, Bickley, has been officially reported missing since May 20th by the War Office.  He first joined the Territorials at the age of 19 in May 1939, and became a keen soldier, going with the B.E.F. to France on April 21.  His last letter to his parents was received May 19.

Private Reynolds was educated at Raglan Road Senior Boys’ School and afterwards became an employee of the South Suburban Co-operative Society Ltd., at the Petts Wood branch.  Later he was attached to the Orpington branch.  He was a member of the society’s local tennis and badminton cub.

Mr and Mrs Reynolds will be grateful to receive any news concerning their son. 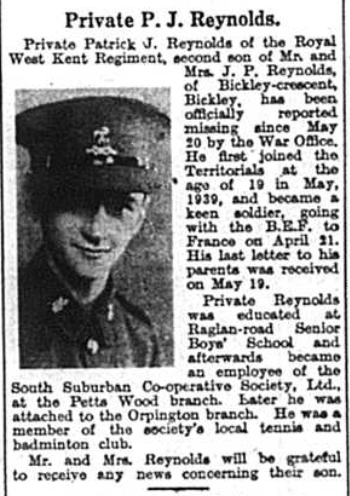