Experiences of a local nurse in France

Praise for British coolness and tact

Miss Winifred Tremain, eldest daughter of Mr and Mrs Frederick Tremain, of Orpington, is very happy in her work as a V.A.D. nurse in No. 14 General Hospital, with the British Expeditionary Force in France.  writing a few days since to her sister, Nurse Tremain says: –

I must tell you about the ghastly thing that happened last night.  I had just got into bed; it would be about a quarter past eight o’clock.  My mate was at second dinner, so I was all alone.  The girl in the next room came into mine with such a scared face! “Whatever can be the matter?” she said.  “All the nurses from dinner are out on the terrace.”  I wasn’t a bit scared.  I just said, very calmly “It’s a Zeppelin, I suppose; let us go out on the balcony and have a look.”  Everything seemed very quiet, and I was wondering that on earth could be the matter, as our nurses were standing so quietly below, when my companion cried out “Good Lord! No. 14’s on fire”! And then we saw that No. 14 Stationary Hospital was on fire close beside us.  We just threw on a few clothes and went to see if we could help.

But all the patients has been got out, and they lay on the beach (the hospital in question being situated by the side of water) in their beds with their feet to the sea.  So that all we could do was to tuck them up and see that they were warm.

I should like a good many English people to have witnessed that scene!  I think it would have done some of them good!  Just picture it,  A perfectly calm night!  Just the tide right out in the distance, and a glorious full moon shining down so placidly, with the sick men on their beds.

No. 14 Stationary is a medical hospital used mostly for infectious diseases.  The men were laughing and happy, and cracking jokes all the time, while the French women, very hysterical, were ringing their hands and crying over the “poor blesses.” 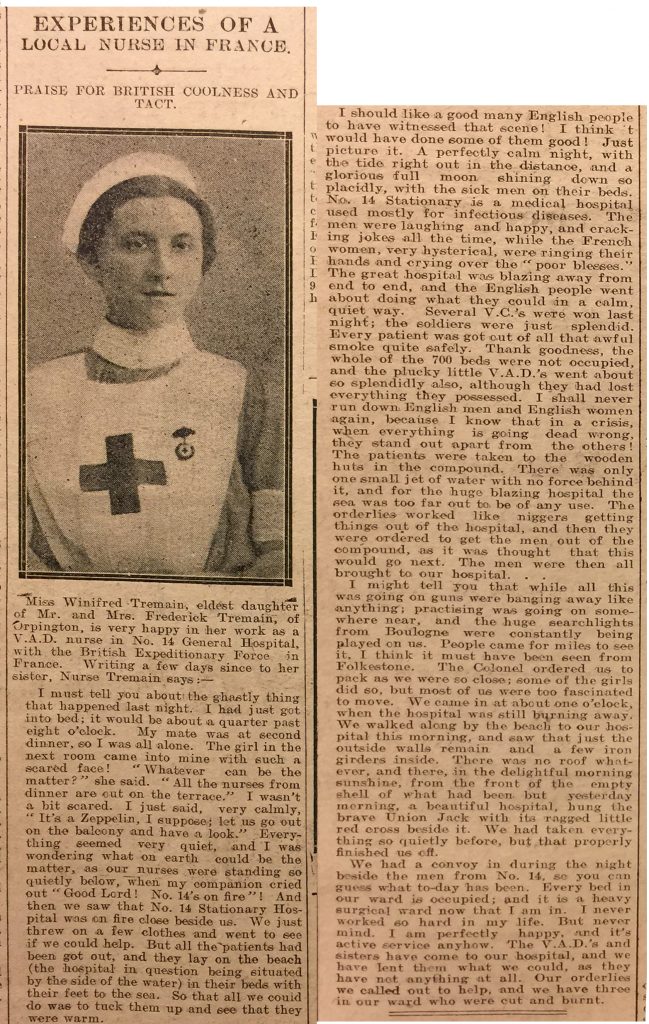 The great hospital was blazing away from end to end, and the English people went about doing what they could in a calm, quiet way.  Several V.C’s were won last night; the soldiers were just splendid.  Every patient was got out of all that awful smoke quite safely.  Thank goodness, the whole of the 700 beds were not occupied, and the plucky little V.A.D.’s went about so splendidly also, although they had lost everything they possessed.  I shall never run down English men and English women again, because I know that in a crisis, when everything is going dead wrong, they stand out apart from the other!

The patients were taken to the wooden huts in the compound.  There was only one small jet of water with no force behind it, and for the huge blazing hospital the sea was too far out to be of any use.  The orderlies worked like __ getting things out of the hospital, and then they were ordered to get the men out of the compound, as it was thought that this would be next.  The men were then all brought to our hospital.

I might tell you that while all this was going on guns were banging away like anything; practising was going on somewhere near, and the huge searchlights from Boulogne were constantly being played on us.  People came for miles to see it, I think it must have been seen from Folkstone.  The Colonel ordered us to pack as we were so close; some of the girls did so, but most of us were too fascinated to move.  We came in at about one o’clock, when the hospital was still burning away.

we walked along by the beach to our hospital this morning, and saw that just the outside walls remain and a few iron girders inside.  There was no roof whatever, and there, in the delightful morning sunshine, from the front of the empty shell of what had been but yesterday morning, a beautiful hospital, hung the brave Union Jack with its ragged little red cross beside it.  We had taken everything so quietly before, but that properly finished us off.

We had a convoy in during the night beside the men from No. 14, so you can guess what today has been.  Every bed in our ward is occupied; and it is a heavy surgical ward now that I am in.  I never worked so hard in my life. But never mind.  I am perfectly happy, andit’s active service anyhow.  the V.A.D.’s and sisters have come to out hospital, and we have lent them what we could, as they have not anything at all.  Our orderlies we called out to help, and we have three in our ward who were cut and burnt.