In this article we focus on the Foxwell family, who resided in the Keston area of Bromley during the second world war years.  Their father, George Foxwell was well known in the area, having had connections with many local clubs including Keston Men’s Club, Keston Football Club and Keston Cricket Club.

George had served in the first war world with the Motor Transport and the Tank Corps, and his three sons; Leslie, Edward and Kenneth, all followed suit and served with the RAF during World War Two.

The article below was published in the Bromley Times in January 1942.

The Foxwell Brothers of Keston

The three sons of Mr and Mrs George Foxwell, of 7 Lakes Road, Keston, are serving in the R.A.F. and already two of them have rendered conspicuous service to the Empire.

Leading Aircraftman Leslie George Foxwell, the eldest son, has been in the East since February 1940, and he was in the campaign for the liberation of Abyssinia from the beginning to the end.  Unfortunately he was somewhat seriously injured on active service and is now in hospital.  His last letter home was cheerful as usual and it is hoped that he will soon be fully recovered.

Leslie attended Keston Church School and won a scholarship to the Beckenham Art School. Going to business in London, he joined up in the A.A. section of the Territorial Force years before Munich.  At the time of the 1938 crisis he transferred to the R.A.F. and was mobilised on the outbreak of war.

The second brother, Mr Edward Raymond Foxwell, better known as “Ted” is a flight rigger in the R.A.F.  He also is an old boy of Keston School.  For 10 years he was on the staff of the South Suburban Gas Company at Bromley, and before joining up he was widely known in dance band circles as the leader of Raymond and his Rhythmic Four.

He played football for Keston and Bromley Gas Works and was also associated with London Transport.

The third son, Air Gunner Kenneth Arthur Foxwell, R.A.F., has already been in action over Britain and the Continent.  He was in the Sectional Engineer’s Department of the G.P.O. before joining up 18 months ago.  He, too, is an old Keston footballer.

All three brother belonged to the Keston Scouts.

Most Kestonians know their father, who in the last war served with Motor Transport and the Tank Corps.  Mr Foxwell, senior, used to be steward of the Keston Men’s Club, and prior to the outbreak of war was well known as an organiser of social events in the village. 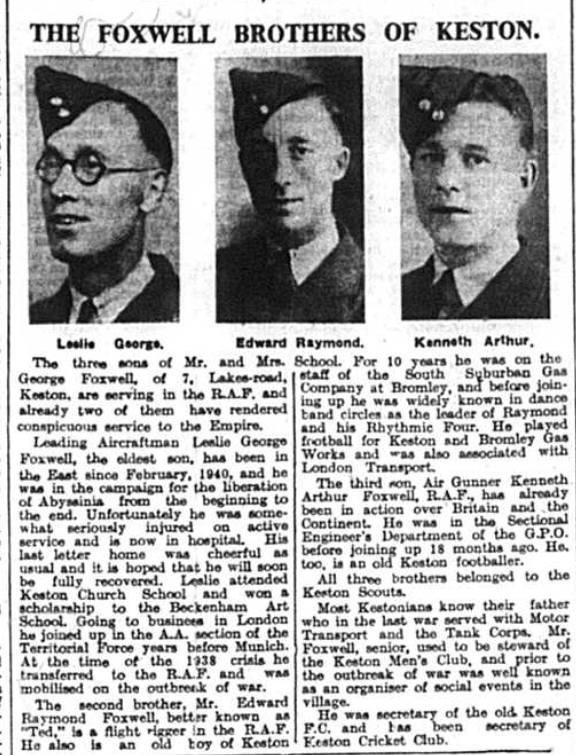