Lieutenant Richard Been Stannard was born at Blyth, Northumberland. His father, Captain George Stannard, was lost with the Mount Oswald, an Allen liner, which he commanded when he was making a trip from Baltimore to England in 1912. He had 2 brothers in the Merchant Service and his sister married Mr Douglas Jenkins.

Stannard left school at 15 and joined the Port Line and was at sea in 1918. He transferred to the Orient Line after obtaining his master’s certificate and was 2nd officer of the liner Orford when the war broke out.

He was awarded the Victoria Cross in 1940 due to an event which took place in Namoso, Norway.

Second Navel V.C. of the War

Lieutenant Richard Been Stannard R.N.R., who has been awarded the V.C. “for outstanding valour and signal devotion to duty at Namsos” while commander of the armed trawler H.M.S. Arab, has his home Bexley Heath.  His mother lives at 97 Oaklands Road, and his wife and two little girls are living there for the time being.

When a Kentish Times representative called at Oaklands Road on Saturday morning he found the family happy about the honour that has been conferred upon Lieutenant Stannard, and very busy with the telephone.  “WE have been answering calls all the morning” said Mrs Stannard, sen. “We did not know about it until very late last night, when someone rung us from a newspaper office.”

Asked if her husband had told her much about his Norwegian experiences, young Mrs Stannard said, “I might not have known as much as I do, but my husband got me to make out a fair copy of the notes he made at the time…”

This report featured in the local newspaper after news of this award had reached his family.

This was the 2nd Naval VC to be awarded. The first was awarded posthumously on 8th June, 1940 to Captain B A W Warburton-Lee, of the destroyer Hard.

When the enemy bombing attacks had set on fire many tons of hand grenades on Namsos wharf, with no shore water supply available, he ran the Arab’s bows against the wharf and held her there. Sending all but 2 of his crew aft, he then endeavoured for 2 hours to extinguish the fire with hoses from the forecastle. He persisted in this work till the attempt had to be given up as hopeless. (He managed to save part of the quay which helped the evacuation).

After helping other ships against air attacks, he placed his own damaged vessel under shelter of a cliff, landed his crew and those of two other trawlers and established an armed camp. Here those off duty could rest while he attacked enemy aircraft which approached by day and kept anti-submarine watch during the night. Throughout a period of 5 days the Arab was subjected to 31 bombing attacks, and the camp and Lewis gun positions ashore were depeatedly machine-gunned and bombed. Yet the defensive position was so well-planned that only one man was wounded. Finally, when leaving the fjord, he was attacked by a German.

The following honours report is from the London Gazette 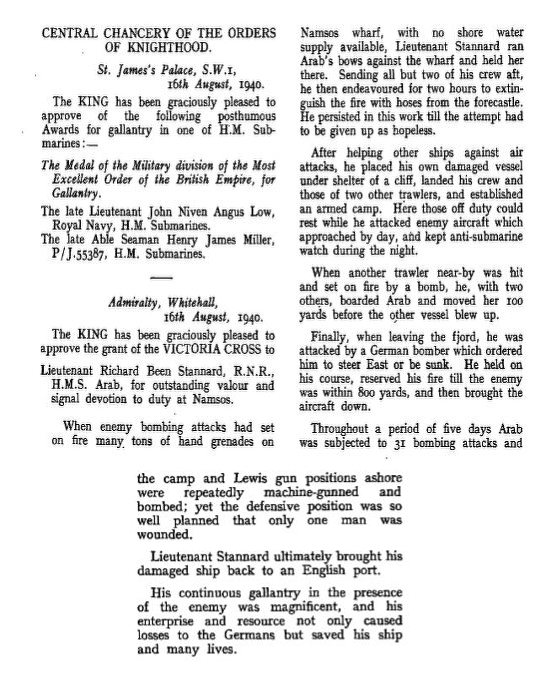