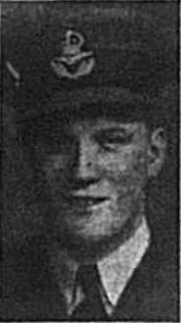 Born in Warwickshire in 1916, Squadron Leader Barrie Heath was a son of Mr G.R. Heath.  He saw active service in 1940 with No. 611 Squadron RA, flying in the Spitfire IIa P7883 “Grahame Heath”, which had been donated by his father in memory of his  brother Grahame, who had died in service in the first world war.

It was in this Spitfire that Heath fought in the Battle of Britain, for which he received his medal.

A memory of him, written on the 611 Squadron website, noted that he once damaged his Spitfire upon landing, for which he was criticised by his squadron commanding officer, Squadron Leader James Ellis McComb.  Heath is said to have replied: “this is my Spit and I’ll fly it any bloody way I like.”

After the Second World War Heath had a successful career in industry, rising to become chairman of the industrial conglomerate GKN.

In 1978 he received a knighthood for services to export.

This article appeared in the Bromley & District Times in July 1941.

Bromley and Bickley will share the pride of Mr and Mrs Anderson, of Woodhill, Bickley, whose daughter, Joy, herself a member of the A.T.S., is married to the flying ace, Squadron Leader Barrie Heath.

Last Friday she accompanied her husband to Buckingham Palace, where he was awarded the Distinguished Flying Cross for what he himself calls “incidents,” but what is officially described as conspicuous gallantry displayed in operations against the enemy.

The Spitfire which this daring airman has been flying since December was presented to the country by his father in memory of his elder son, who was killed while flying in the last war.

Squadron Leader Heath, who was Cambridge when war was declared, and was called up immediately as he was in the Air Force Reserve.

Mrs Barrie Heath, who was married on the day war was declared, joined the A.T.S. before the war – at the time of the Munich crisis – and is now a company commandant stationed in Lincolnshire.

Our heartiest congratulations go out to this young couple for the grand effort they are making for the country. 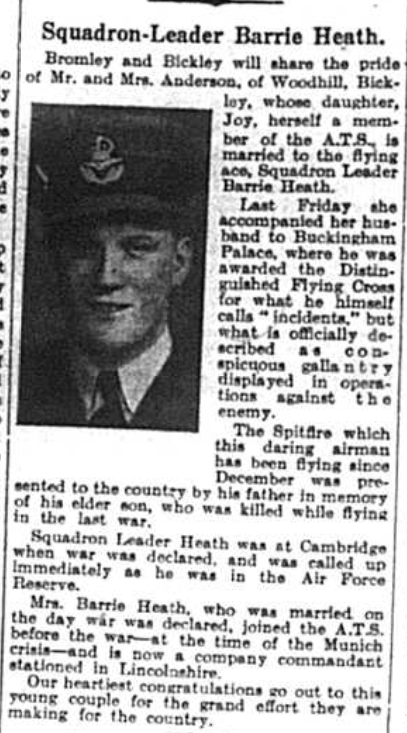