The Royal Navy lost a large number of their capital ships to enemy action during the early part of the second war, and was facing increasing pressure to provide escorts for convoys in the Atlantic.  With ships needing to be replaced, Warship Weeks – another of the British National savings campaigns, was set up during the Second World War, with the aim of encouraging a civil community to adopt a Royal Navy warship.

Following a successful Warship Week in March 1942, the HMS Broke  destroyer was adopted by the civil community of Bromley, Kent.

The ship, originally named HMS Rooke, was launched on the 16th September 1920.  It was towed to HM Dockyard, Pembroke Dock for completion as an economy measure, however on the 13th April 1921 the ship was renamed Broke after the sale to Chile of the WW1 destroyer which was the first Royal Navy ship to carry this name.

The following story, which featured in the Bromley & District Times, tells the tale of the ‘original’ HMS Broke – a Faulknor-class destroyer leader of the Royal Navy, which saw action in several battles, before it was sold to Chile after the conclusion of WW1.

Bromley’s Objective for the Warship Week (February 28- March 7) is the round sum of £400,000, and the ship to be adopted is H.M.S. Broke, with which the name of Admiral Sir Edward Evens (who is opening the Week) will be for ever associated.

The great exploits of the Broke have been collated by Commander C.L.A. Woollard, R.N., who served in the destroyer Beaver of the Third Destroyer Flotilla, Harwich.

When she first achieved fame

The Broke first achieved fame at Jutland on May 31, 1916 when, with the Tipperary and the Fourth Flotilla, she was in the very heart of the night fighting and had, perhaps, on this night, as many fighting adventures as has ever fallen to the lot of one small squadron of ships.

The Broke at the time was in command of Commander Walter I. Allen and she was the sixth ship in the line when the flotilla was, at about 11.30pm, engaged by four German cruisers at close range.  The Broke fired a torpedo at one of the enemy ships, altering course to do so and increasing to full speed, with the intention of keeping in touch with the enemy.

The destroyer Sparrowhawk had just taken station astern of the Broke when, almost at once, another large ship suddenly loomed out of the dark on the starboard bow and not more than 800 yards away.  Commander Allen gave the order to stand by to fire another torpedo and was on the point of manoeuvring the Broke for this purpose when the stranger switched on a blaze of searchlights and opened fire smothering the Broke with bursting shell.  The lower bridge was struck, the helmsman and others of the crew instantly killed and the wheel and engine room telegraphs completely demolished.

The glare of the huge searchlights from the German ship in the dark night at close range made it almost impossible for the Broke to aim her guns or fire her torpedoes.

When the wheel and telegraphs had been shot away, the wheel had 15 degrees of helm on and the telegraphs were at full speed ahead so that the ship began to circle round and she struck the Sparrowhawk abreast the bridge, her sharp bows cutting half way into the destroyer and pushing her bodily through the water until the two vessels crashed alongside each other, one officer an four men of the Sparrowhawk being thrown on the Broke’s forecastle by the force of the impact.

Lurching unpleasantly in the swell, the Broke seemed to be sinking by the bow.  Steam roaring out of the foremost boiler room through damage done by enemy shell shrouded the ship in a cloud of misty vapour.

Commander Allen, having ordered his Frist Lieutenant and another officer to go aft and connect up the after steering position, went into his sea cabin on the bridge to dispose of the confidential books.  The enemy had ceased firing and disappeared in the dark, but of course might reappear at any moment to complete the work of destruction.

The two officers with great difficulty found their way aft and met the engineer officer who told them that he had stopped the engine on his own initiative and that three boilers were still in working order.

The after bridge was then manned and the Broke went astern to clear the Sparrowhawk and shortly afterwards from out of the darkness, the Contest (another destroyer of the Fourth Flotilla) steaming at high speed, crashed into the Sparrowhawk’s stern cutting five feet off and jamming her rudder.  The Sparrowhawk minus bows and stern lay off tin the darkness – a helpless wreck. It was then about midnight and the Broke managed to steam off at slow speed towards the English coast, shortly afterwards sighting three enemy ships which showed no sign of having seen her. 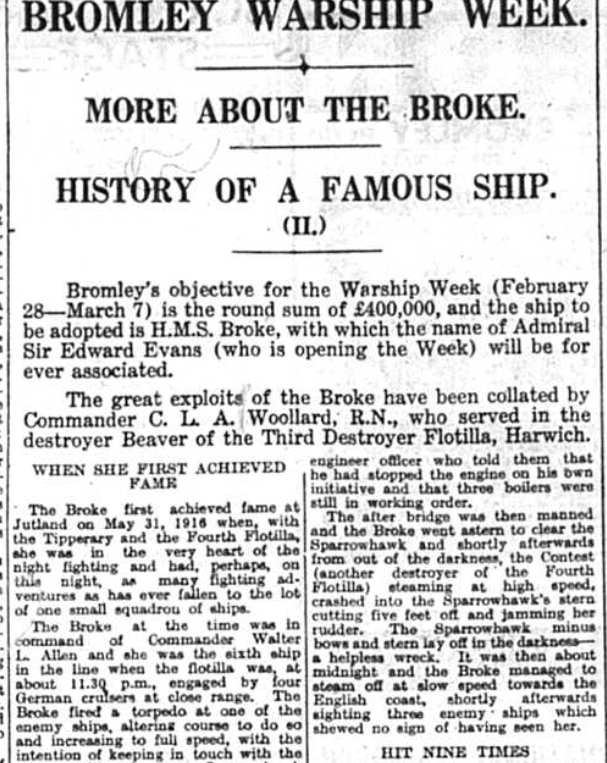 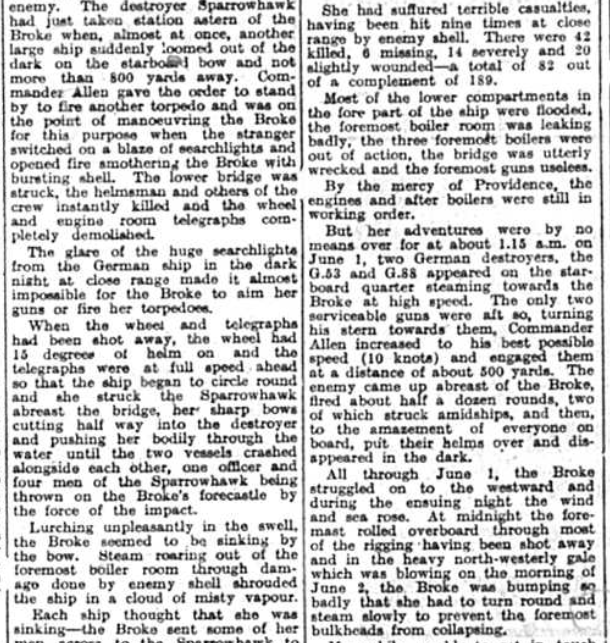 She had suffered terrible casualties, having been hit nine times at close range by enemy shell.  There were 42 killed, 6 missing, 14 severely and 20 slightly wounded – a total of 82 out of a complement of 189.

By the mercy of Providence, the engines and after boilers were still in working order.

But her adventures were by no means over for at about 1.15am, on June 1, two German destroyers, the G.52 and G.88 appeared on the starboard quarter steaming towards them, Commander Allen increased to his best possible speed (10 knots) and engaged them at a distance of about 500 yards.  The enemy came up abreast of the Broke, fired about half a dozen rounds, two of which struck amidships, and then to the amazement of everyone onboard, but their helms over and disappeared in the dark.

All through June 1, the Broke struggled on to the westward and during the ensuing night the wind and sea rose.  At midnight the foremast rolled overboard through most of the rigging having been shot away and in the heavy north-westerly gale which was blowing on the morning of June2, the Broke was bumping on badly that she has to turn round and steam slowly to prevent the foremost bulkheads from collapsing.

Meanwhile, unable to get in touch by wireless, the Commander-in-Chief had despatched the Harwich Naval Force in search of her, but their efforts were fruitless.  The weather moderated in the night of June 2, and the Broke was bale gradually to resume her course to the westward and she eventually reached the Tyne.  Of the damaged ships to reach harbour again, the Broke was the last and was almost given up as lost by enemy action.