The Silver Wolf scouting award is the highest award given out by The Scout Association.  It is an unrestricted gift of the Chief Scout and awarded “for services of the most exceptional character.”

The award itself consists of a Silver Wolf suspended from a dark green and yellow neck ribbon.

During the early years of the Scout Movement throughout the world, it was the practice of the Founder, Lord Baden-Powell, to give the Silver Wolf to Scouters in any country who had done outstandingly valuable work for the Movement.  It’s recipients were those who had performed under exceptional circumstances like saving a life or repeated acts of bravery, endurance, or self-sacrifice. By 1941 it had became an award for Adult volunteers for Services to Scouting.

This article, from the Bromley & District Times, features the Bromley’s Boy Scout District Commissioner, Bernard Ayling, who received the honour in April 1941.

Bernard Ayling was in scouting for 46 years, from January 1941 to October 1955. At the same time he was also Managing Director of the T.S. Ayling shoe shop in Beckenham.

District Commissioner Bernard Ayling wearing the collar, which is the insignia of the Silver Wolf, the highest honour in Scoutdom, which has just been presented to him by the County Commissioner, Brigadier W.E. Clark, C.M.G., D.S.O.

Mr Ayling already had the Medal of Merit. 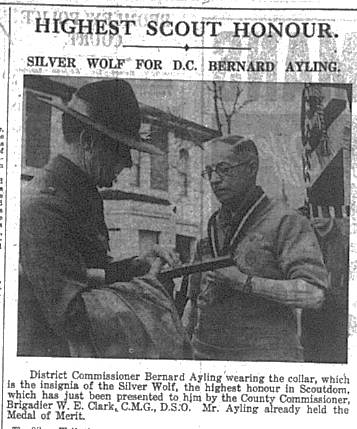