Prisoner of War at Stalag, Germany

Mr and Mrs Stagg, of 23 Pope Road, Bromley, have received news that their son, Driver Albert Edward Stagg, aged 22, of the R.A.S.C. is a prisoner of war at Stalag VIIIB, in Germany, where many other of our local lads are confined.

Driver Stagg is an old boy of Raglan Road school and before the war he was employed in the outfitting department of the South Suburban Co-Operative at Chatterton Road, Bromley and later at Sevenoaks.  He was called up in February, 1940, and saw service in France.

He was back in this country for a time, and was then sent out East and thence to Greece, where he was taken prisoner.

His parents could not get news of him for some time, but have how heard from him on his removal to Germany.  Friends wishing to write to him should address their letters to Driver Albert E. Stagg, Prisoner of War No. 23558, Stalag VIIIB, Germany. 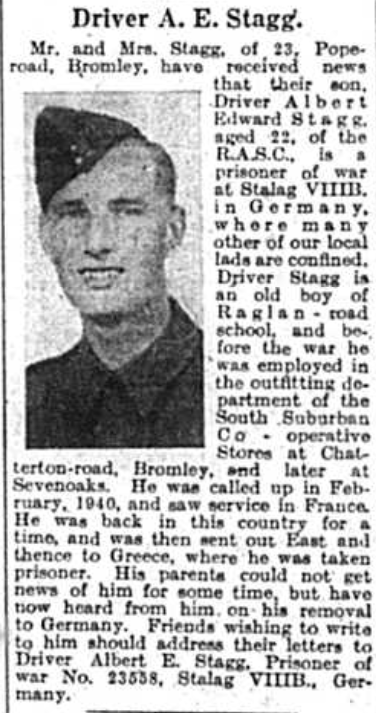