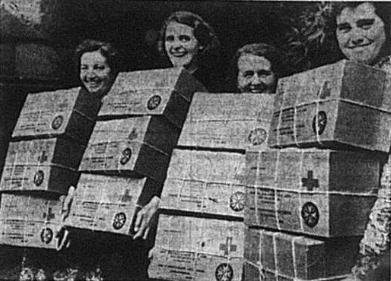 Rooms at Rothwell, Sundridge Avenue are used five days a week by the workers, who number a hundred, most of whom are volunteers.

Miss N.L. Spicer is the manager of the Centre with Miss Galloway, head storekeeper, and Mrs Ford Hutchinson, assistant storekeeper.

Seen by a Kentish Times representative, Miss Spicer, who is the daughter of Mr Leonard Spicer, 20 Orchard Way, and the late Mrs Spicer gave some interesting particulars of the useful piece of war work tat is being done in bringing consolation to the brave men of the Services who are prisoners in hostile countries.

Food packing centres are in other part of England, and it can be imagined what a boon and blessing these parcels of food, cigarettes and tobacco are when they arrive safely in the hands of the men through the Red Cross organisation at Geneva.

Miss Spicer explained that there are half a dozen full time paid workers at Rothwell.  The others are giving their services voluntarily, coming to the Centre two days a week and working from 10am to 1pm, and from 2 to 5pm, or giving whatever time they can spare.  Saturday and Sunday are free days.

In February of this year [1941] another Centre was started at Salisbury.  The storekeeper and head clerk there visited Bromley to gain experience in the work.

Among the voluntary workers in Sundridge Avenue, are residents of Bromley, Bickley, Beckenham, Chislehurst and Sidcup. 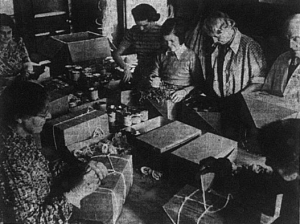 CHEERFUL WORKERS
Our representative saw the ladies at work in the rooms, using their nimble fingers in packing the parcels and securely fastening them.

The Cigaretts and tobacco come to the Centre in large boxes from the manufacturers, each box being filled with tins, and each tin containing either 50 cigarettes r 2ozs of tobacco,

Thirty-two tins are packed in each parcel, 28 of cigarettes and four of tobacco.

When the parcels are ready, they in turn are packed into Red Cross bags, six in each bag.

Every morning men of the Post Office staff come to the packing centre to seal the bags, and later in the day vans arrive to take the bags away, nearly a hundred bags a day.  These are then sent directly to the port en route for Geneva.  The International Red Cross know the number of prisoners in each camp, and parcels are sent to them regularly, each man getting either 50 cigarettes or 2oz. of tobacco a week.

So it is a gigantic enterprise on the benevolent side of the war effort.

In one of the rooms are three photographs, two of them showing the parcels stored at Geneva and the other the parcels arriving at a prison camp in Germany.  The smiling faces of the prisoners reveal their satisfaction and delight. 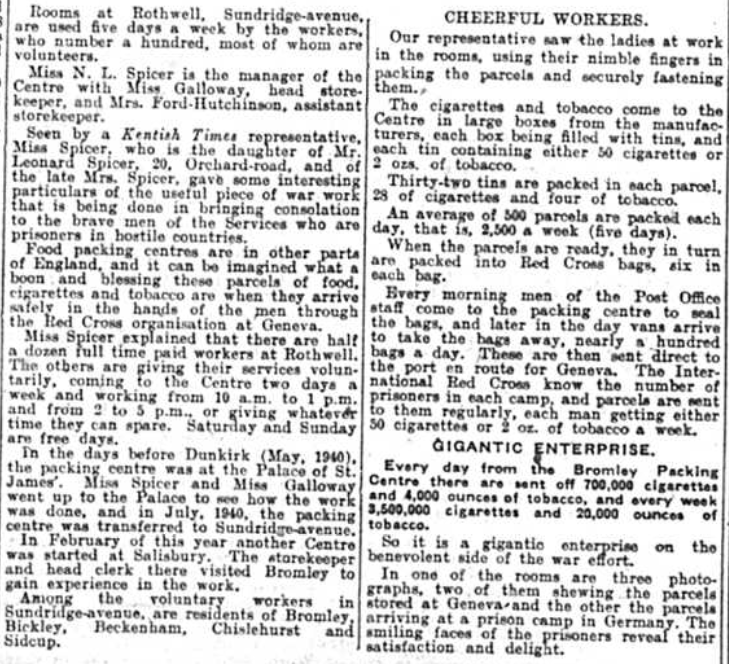