The White Hart Hotel, which once stood in the heart of Bromley High Street, was a large premises which hosted a number of events in its heyday.  In 1941, the RAF (Bromley branch) hosted a New Years eve dance, which included two tableaux represent the old and new years.

The Bromley Times reported on the event in early January 1942.

The Bromley branch of the Comrades of the Royal Air Force held a very enjoyable dance on New Year’s Eve at the White Hart Hotel, Bromley.

A cabaret was given by Miss Lucille Gaye and Miss Jacqueline Elmere, of the cast of “Black Vanities” from the Victoria Palace, London, and it was received with great enthusiasm.

At midnight two tableaux, arranged by Mr W. Humerston, were presented.  The first, representing the old year, showed Father Time (the hon. secretary of the branch, Mr A.B. Poston) dragging Hitler (vice-chairman of the branch, Mr H.M. Over) at the end of a long, thick rope.  The second showed Brittania (Miss Joan Jeffries) seated in a chariot escorted by representatives of the three Services.

There were nearly 200 people present, among them being the Mayor and Mayoress of Bromley and Air Commodore E.D. Davis, OBE, who represented prizes to the winners of the novelty dances.

Music was supplied by Bert Frost and his band, and the M.C. was Mr C.H. Ring.

the general arrangements were in the hands of Mr Poston, Mr Humerston and Mr Over, who would like to acknowledge the assistance of the officers commanding the local cadet units of the Navy, Artillery and Air Training Corps. 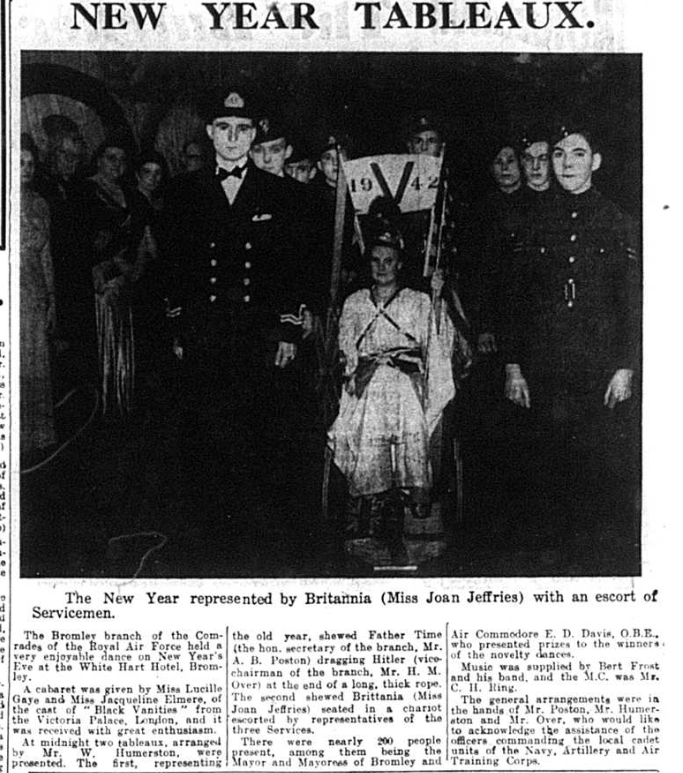