Selection of WW1 Heavy Bombers from all Nations

The first heavy bomber was designed as an airliner. The Russian aircraft designer, Igor Sikorsky designed the Sikorsky Ilya Muromets to fly between his birthplace 9poland) and his new home (St Petersburg). It did so briefly until August 1914, when the Russo-Balt wagon factory converted to a bomber version, with British Sunbeam Crusader V8 engines. By December 1914 a squadron of 10 was bombing German positions on the Eastern Front and by summer 1916 there were twenty. It was well-armed with nine machine guns, including a tail gun and initially was immune to German and Austro-Hungarian air attack. The Sikorsky bomber had a wingspan just a few feet shorter than, with a bomb load only 3% of, a World War II Avro Lancaster.

The British Handley Page Type O/100 owed a lot to Sikorsky’s ideas; of similar size, it used just two Rolls-Royce Eagle engines and could carry up to 2,000 lb of bombs. The O/100 was designed at the beginning of the war for the Royal Navy specifically to sink the German High Seas Fleet in Kiel: the Navy called for “a bloody paralyser of an aircraft” Entering service in late 1916 and based near Dunkirk in France, it was used for daylight raids on naval targets, damaging a German destroyer. But after one was lost, the O/100 switched to night attacks. The uprated Handley Page Type O/400 could carry a 1,650 lb bomb, and wings of up to 40 were used by the newly formed, independent Royal Air Force from April 1918 to make strategic raids on German railway and industrial targets. A single O/400 was used to support T. E. Lawrence’s Sinai and Palestine Campaign.

The Imperial German Air Service operated the Gotha bombers, which developed a series of marques. The Gotha G.IV operated from occupied Belgium from the Spring of 1917. It mounted several raids on London beginning in May 1917. Some reached no further than Folkestone or Sheerness on the Kent Coast. But on June 13, Gothas killed 162 civilians, including 18 children in a primary school, and injured 432 in East London. Initially, defence against air attack was poor, but by May 19, 1918, when 38 Gothas attacked London, six were shot down and another crashed on landing. German aircraft companies also built a number of giant bombers, collectively known as the Riesenflugzeug. Most were produced in very small numbers from 1917 onwards and several never entered service. The most numerous were the Zeppelin-Staaken R.VI of which 13 saw service, bombing Russia and London: four were shot down and six lost on landing. The R.VIs were larger than the standard Luftwaffe bombers of World War II. The Gotha G.V1 and Zeppelin Staaken R.V1 were illustrated in Week 3 – Biggin Hill Aircraft.

The Vickers Vimy, a long-range heavy bomber powered by two Rolls-Royce Eagle engines, was delivered to the newly formed Royal Air Force too late to see action (only one was in France at time of the Armistice with Germany). The Vimy’s intended use was to bomb industrial and railway targets in western Germany, which it could reach with its range of 1,400 km and a bomb load of just over a ton. The Vickers Vimy is best known as the aircraft that made the first Atlantic crossing from St John’s Newfoundland to Clifden in Ireland piloted by the Englishman John Alcock and navigated by Scot Brown on June 14, 1919.

Heavy Bombers from other Countries include :- 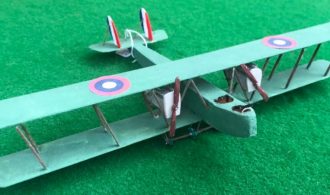 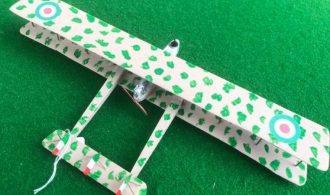 CAPRONI Ca.5 The Caproni Ca.5 was an Italian heavy bomber of the World War I and the postwar era. It ...
Read More 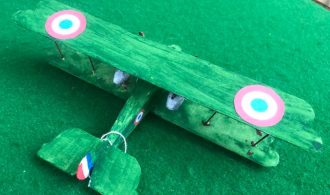 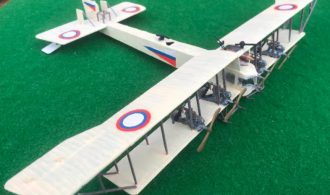 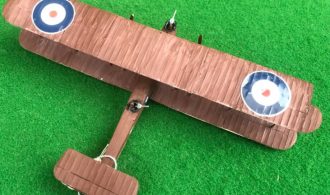