The many sinkings of tankers and oil-fuelled vessels has greatly increased the peril to guillemots, puffins, razorbills, comorants and gulls of all kinds, as well as many estuary ducks.  They can do nothing but drift on tides, back and forth, until they die after weeks of slow starvation.

Sometimes heavy weather casts these oil-smothered sufferers ashore.  People living round our coats are constantly telling of hundreds of dead and dying birds washed ashore.  The secretary of the Royal Society for the Protection of Birds says that, compared with the last war, the figures are astronomical.

Nothing can, of course, be done about it.  It most cases the kindest thing to do is kill any birds so foudn that are not already dead. 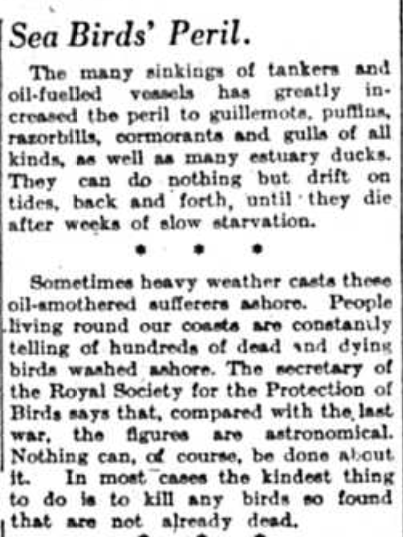