Rowntree’s is a British confectionery business founded at Castlegate, York by Henry Isaac Rowntree, when he purchased the already established Tukes’ cocoa and chocolate business.

As a teetotal Quaker, he was able to add to the social side of the business: chocolate drinks were promoted as an alternative to alcohol for the working man.

In 1869 he was joined in business by his brother Joseph, who developed Rowntree’s Elect Cocoa in 1887.  Marketed as ‘more than a drink, a food’, it proved extremely popular, resulting in the firm having to move to larger premises.

Throughout much of the 19th and 20th centuries, Rowntree’s was one of the big three confectionery manufacturers in the United Kingdom, alongside Cadbury and Fry.

The firm hit trouble in the years leading up to the Great War, as the popularity of Elect Cocoa declined, and the 1920s depression hit.

However, with a new marketing director (and future Chairman) onboard, George Harris, his knowledge of American promotional methods helped to turn things around.  The number of lines were slimmed down, and during the 1930s a number of product were launched, all of which have become household names; KitKat, Black Magic, Aero, Dairy Box, Smarties Rolos and Polos.

This advert appeared in 1943 when rationing was at its height, so was possibly seen as a good addition at the dinner table for hungry bellies.

This meal time drink is a food as well

It is nourishing and easily digestible, and even makes it easier to digest your other food. 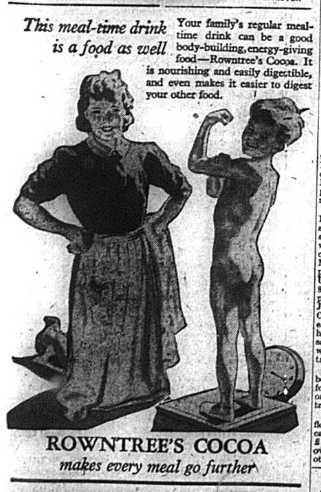