By the mid end of the Second War World, Britain began using larger ‘giant’ bombs against the enemy.  They were nicknamed the ‘blockbuster bomb’ by the press and referred to a bomb which had enough explosive power to destroy an entire street or large building through the effects of blast in conjunction with incendiary bombs.

By informing the reader of the weapons being used upon the Germans during the Second World War, was this a form of propaganda to scare the enemy?

This small feature appeared in the local newspaper in May 1943, detailing the 2,000 lb bombs that the British were using on their raids, but also acknowledges the use of larger 4,000 lb and 8,000 lb bombs.

Giant British 4,000 lb and 8,000 lb bombs are still a close secret, but some idea of their size is given by the 2,000 pounder shown above.  They are many times larger than anything the Germans have ever used against us.

An automatic fuse is fitted which remains in a “safe” position until the bomb is actually dropped; then the rush of air turns a small windmill, and sets the fuse ready for action.  There are three or more explosions in every bomb – a small detonator and an intermediate charge being used  to set off the main load of explosive. 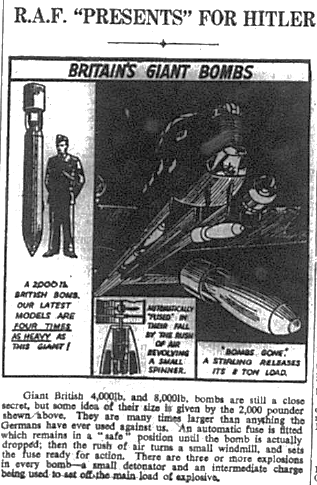