We had a comfortable Christmas, everything worked smoothly and well” said Mr H.J. Sibley, head postmaster of Bromley to a Kentish Times representative.

People had been asked to post earlier than in peace-time and earlier in the day. In their readiness to comply with this request, it was a tremendous help to all departments of the postal service. “We did not get the violent peaks as in former years, The Christmas rush was spread over a longer period” said Mr Sibley.

The busiest day on the postage side (mail going out) was December 18, and the busiest day on the delivery side (mailing coming in) were Friday 20 and Saturday, December 21. The Postmaster said that the number of letters and cards posted as recorded by the stamping machine showed a reduction of 35 per cent, as compared with the previous year. Taking the period from December 9 to December 24 the letters and cards posted numbered 827,100 as against 1,273,850 in 1939. Parcels posted were 34 per cent below the numbers of a normal year, and parcels delivered were down by 53 per cent.

“We had the earliest finish for yeas, and everything was clear by Christmas Day.” said Mr. Sibley.

The accommodation for the public is inadequate for a town of the size of Bromley, and the Post Office was often filled to capacity. The counter staff had a trying and difficult time, but they performed their duties with patience and efficiency.

Mr. Sibley said : “We employed a casual force of 235 ‘postmen’ and ‘postwomen,’ 102 men and 133 women, and I must say that they did remarkably well. We were very pleased indeed with the way the women tackled their new duties. Some of them are wives of postmen. “We had a number of boys from the County School for the fortnight (December 9 to 24) for sorting work, and they did good work, too.”

Mr Sibley and staff were pleased with the quickness of these County School boys, who by the way had one of the best lessons in geography thy had ever had in their lives. 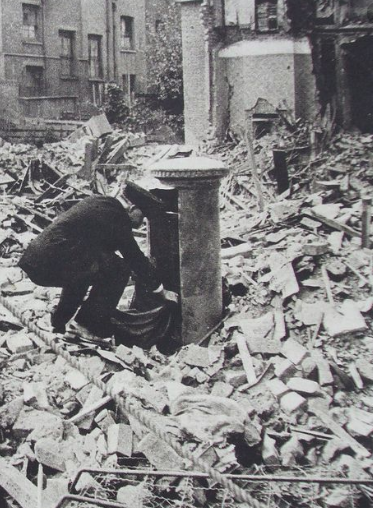