Mrs Turrell, of 42 Bridge Road, St Mary Cray, has been informed by the War Office that her husband, Private Frederick William Turrell, of the Queen’s Own Royal West Kent Regiment, has been reported missing.  In February, when Mrs Turrell was ill in hospital, her husband was granted special leave to visit her, and that was the last time she saw him.

Before joining the West Kents over three years ago, Private Turrell was employed at the Marlborough Bakeries, Petts Wood. He was a keen footballer and played at one time for Bromley Common.  Mrs Turrell told a Kentish Times representative that her husband had all the medals which his father won for football (he played for Cray Wanderers), and she believes these have also disappeared.

His parents live at 56 Holbrook Way, Bickley and they and his wife will be grateful to hear from any friends or acquaintances who may have new of him 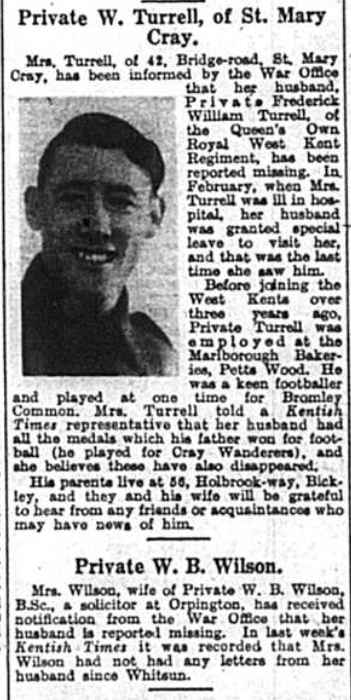