The SPAD S.A (also called S.A.L.) was a French two-seat tractor biplane first flown in 1915. It was used by France and Russia in the early stages of the First World War in the fighter and reconnaissance roles. It was a somewhat unusual aircraft that carried its observer in a nacelle ahead of both wing and engine.

The SPAD A.1 prototype was the first aircraft produced by SPAD following its reorganization from the pre-war Deperdussin company. The chief designer, Louis Béchereau, had been involved in designing that firm’s successful monocoque racing monoplanes, and many design details were carried over from the Deperdussins.

The aircraft was designed to carry not only its pilot in the normal position, but also an observer in a streamlined nacelle ahead of the propeller. This configuration was an attempt to combine the advantages of the tractor and the pusher types, giving the observer a clear field of view to the front and sides without the drag penalty of the typical pusher.

However, communication between the pilot and the observer was nearly impossible. The front pulpit section vibrated badly and, in multiple cases, parted company from the rest of the aircraft while in flight. Like many pushers, it also put the observer at risk of being crushed in even a relatively mild crash or “nose-over”.

The S.A had a short and inauspicious career in the French Aviation Militaire, and it was quickly replaced in service by less dangerous aircraft.
The Imperial Russian Air Service operated the SPAD S.A-2 and S.A-4 for a longer period of time due to a shortage of available aircraft. Some 57 S.A-2s and S.A-4s went to the Imperial Russian Air Service. During winter operations, Russian aircraft were fitted with skis instead of wheels. 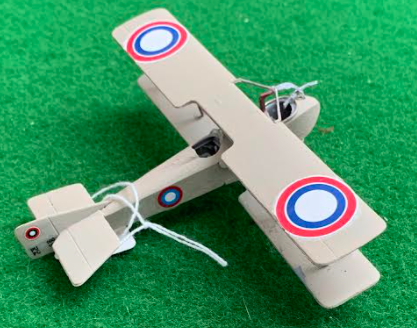