This report describes the aftermath of a heavy night of bombing on the town of Bromley in Kent on 16th April 1941.

Due to government censorship of newspapers at the time, no exact location is given, other than a South-East residential location, but we now know this location to be Bromley, St Peter’s and St Pauls’ as the parish church which was destroyed, and the furniture depository being Dunn’s of Bromley which was located on Market Square.

Heavy Bombs and Incendiaries in a residential area.

Churches raised to the ground.

Extensive damage to houses and business premises
A S.E. residential area suffered most severe damage to churches, public buildings, business premises and private houses on Wednesday night.
Bombs of a heavy calibre as well as incendiaries were dropped at random. Several fires were started.

Houses were destroyed and many others seriously affected.  There were a number of casualties – some fatal.

PARISH CHURCH DEMOLISHED
A Parish Church with historical associations was demolished, except for the ruins of the tower, a Congregational Church was gutted, also another place of worship and a memorial hall.

The premises of a firm of motor builders was wrecked.

But for the activities of fire spotters, the damage would have been even worse.  A bomb which fell near a large bakery wrecked the premises and also laid to ruins a garage at the corner of a poorest residential quarter.  Several small houses were rendered uninhabitable over a wide area.  It is believed that there were several fatal casualties.

LAUNDRY BURNT OUT
There were more casualties when a heavy bomb struck a block of flats on a housing estate. A laundry was burnt out, but good work by firemen saved adjoining premises.

In one pleasant road, five houses were demolished.  Some people were killed and others injured, and in another road some industrial buildings were considerably damaged. 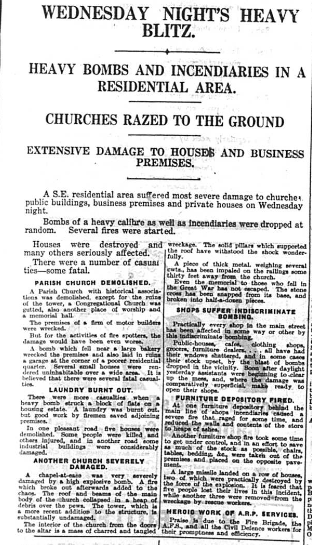 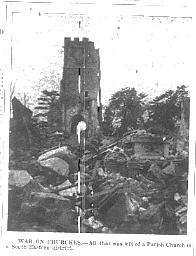 ANOTHER CHURCH SEVERELY DAMAGED
A chapel-__-__ was very severely damaged by a high explosive bomb.  A fire which broke out afterwards added to the chaos.  The roof an beams of the main body of the church collapsed in a heap of debris over the pews.  The tower, which is a more recent addition to the structure, is substantially undamaged.

The interior of the church from the doors to the altar is a mass of charred and tangled wreckage.  The solid pillars which equipped the roof have withstood the shock wonderfully.

A piece of thick metal, weighing several ___, has been impaled on the railings some thirty feet away from the church.

Even the memorial to those who fell in the Great War has not escaped.  The stone __ has been snapped from its base and broken in to half a dozen pieces.

SHOPS SUFFER INDISCRIMINATE BOMBING
Practically every shop in the main street has been affected in some way or another by the indiscriminate bombing.
Public houses, cafes, clothing shops, grocers, furniture dealers… all have had their windows shattered and in some cases, their stock upset by the blast of bombs dropped in the vicinity,  Soon after daylight yesterday assistants were beginning to clear up the mess and, when the damage was comparatively superficial, make ready to open their doors.

FURNITURE DEPOSITORY FIRED
As one furniture depository behind the main shops___ caused a savage fire that ranged for some time and reduced the walls and contents of the store to heaps of ashes.

Another furniture shop fire took some time to get under control, and in an effort to save as much of the stock as possible, chairs, tables, bedding___ were take out of the premises and placed on the opposite pavement.

A large __ landed on a row of houses, two of which were practically destroyed by the force of the explosives.  It is feared that five people lost their lives in the incident, while another three were removed from the wreckage by rescue workers.

HEROIC WORK OF ARP SERVICES
Praise is due to the Fire Brigade, the A.R.P. and all the Civil Defence workers for their promptness and efficiency. 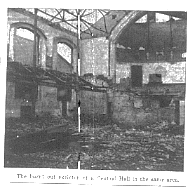