David Stanley Waite was the son of Harold & Margaret Waite of 22 Woodlands Way, West Wickham.   He married Margaret Greenhalgh in Bromley in 1934.

After studying at the London University School of Journalism, he worked for several years in Fleet Street, and was for some years on the staff at the Kentish Times.  In 1935 David left England for Japan where he joined the Straits Times as a sub-editor.  He was then only 25 years old.

He wife Margaret, joined him in Singapore and they had two children, Christopher and Veronica.  The following article, from the Bromley & Kentish Times, reports on him being missing after the fall of the city in early 1942. 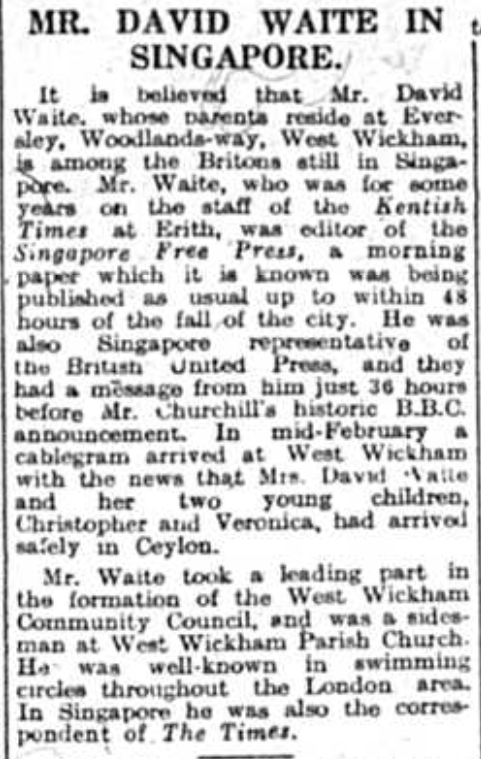 It is believed that Mr. David Waite, whose parents reside at Eversley, Woodlands Way, West Wickham, is among the Britons still in Singapore.  Mr Waite, who was for some years on the staff of the Kentish Times at Erith, was editor of the Singapore Free Press, a morning paper which it is known was being published as usual up to within 48 hours of the fall of the city.

He was also Singapore representative of the British United Press, and they had a massage from him just 36 hours before Mr Churchill’s historic BBC announcement.  In mid-February a cablegram arrived at West Wickham with news that Mrs David Waite and her two young children, Christopher and Veronica, had arrived safely in Ceylon.

Mr Waite took a leading part in the formation of the West Wickham Community Council, and was a sides-man at West Wickham Parish Church.  He was well-known in swimming circles throughout the London area.  In Singapore he was also the correspondent of The Times.

Sadly David did not survive the war.  He died while trying to escape and was presumed to have been drowned  following the sinking of the SS Giang Bee, just before the fall of Singapore on the 13th February 1942. “His death brought to an untimely end a career full of brilliant promise and was a heavy loss to Malayan journalism.”

He was a much loved colleague, which you can see from this report of him from the Singapore Free Press, published on 16th May 1946, “[his] outstanding qualities as a journalist will never be forgotten by those who worked with him”.

Margaret went on to marry Roger Cecil Sunderland Bell before returning to England in c.1946. Her family then moved out to Australia.