Mrs Mortimer, of 120 Homesdale Road, Bromley, gave to a Kentish Times reporter some particulars of her family’s exceptionally fine record of service for King and Country.

Mr and Mrs Mortimer lived in Croft Road for nearly 20 years.  They have had 13 children, and there are 11 living – seven sons and four daughters.  The two eldest are twin sons, Horace Mortimer (who has a family of nine children), and Leslie Mortimer (who has 10 children). Three other sons are married, and the four daughters are all married.  Althogether Mr and Mrs Mortimer have between 30 and 40 grandchildren.

the father and the seven sons are all serving in the Army (or have been) in different regiments at home and abroad.  Tow have been invalided out; one is a prisoner of war in Germany; one has been wounded and is in hospital.

Here are portraits of the father an the seven sons.

Two of the son-in-laws (B. Alder and W. Barrett) are in the Army; and E. Jackson and Mrs Denyer are engaged in work of national importance.

The twin sons went to Ragland Road School, Bromley Common; all the other children to the Bromley National School. 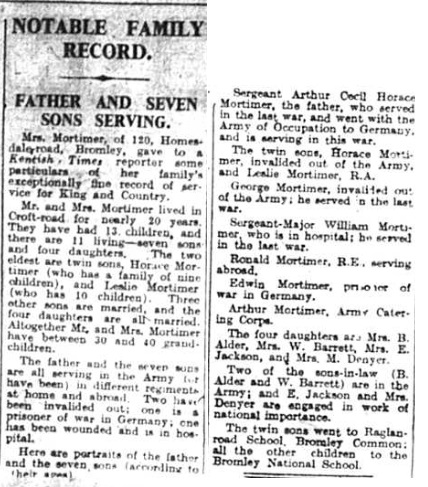 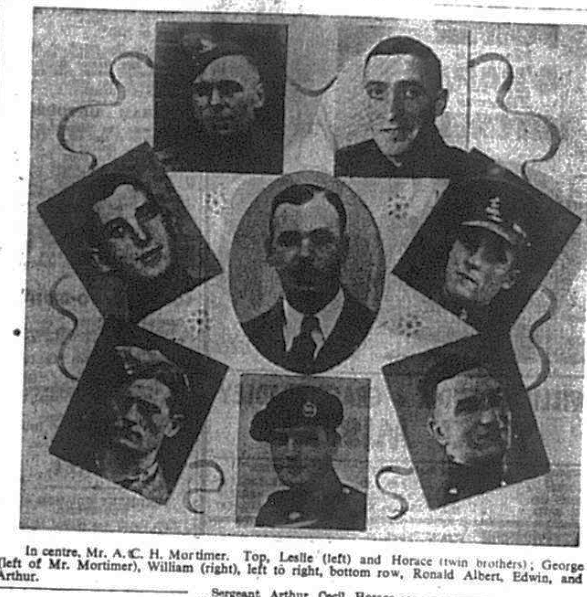