The Fokker E.V was a German parasol-monoplane fighter aircraft designed by Reinhold Platz and built by Fokker-Flugzeugwerke. The E.V was the last Fokker design to become operational with the Luftstreitkräfte, entering service in the last months of World War I. After several fatal accidents due to wing failures, the aircraft was modified and redesignated Fokker D.VIII. Dubbed the Flying Razor by Allied pilots, the D.VIII had the distinction of scoring the last aerial victory of the war.

The first production E.V aircraft were shipped to Jasta 6 in late July. The new monoplane was also delivered to Jasta 1, Jasta 19, Jasta 24 and Jasta 36.

Deliveries continued in October. At the direction of the Kogenluft (Kommandierenden General der Luftstreitkräfte), Idflieg redesignated the modified aircraft D.VIII. The earlier “E.” and “Dr.” prefixes for fighter monoplanes and triplanes, respectively, were abolished and all fighters would henceforth receive the “D.” prefix instead. The D.VIII commenced operations on 24 October with Jasta 11. The aircraft proved to be agile and easy to fly. Allied pilots nicknamed it the Flying Razor, presumably because it resembled a cocked straight razor in flight.

Jasta 5 was issued a D.VIII. The famed ace Erich Lowenhardt performed a test flight of a Fokker EV whilst paying a visit to Jasta 6 in the summer of 1918, but no evidence of him flying this aircraft on any other occasion exists to date.

A total of 381 aircraft were produced, but only some 85 aircraft reached frontline service before the Armistice. Some reached Italy, Japan, the United States, and England as trophies, but most were scrapped in accordance with the terms of the Armistice. 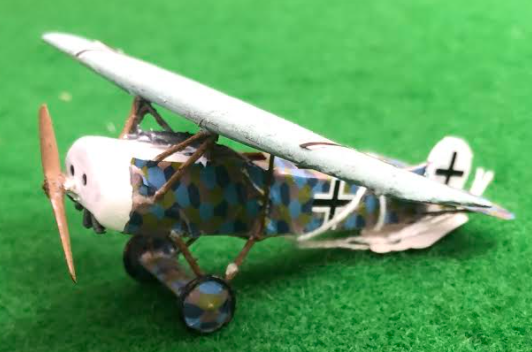