The Bromley & District Times reported on a number of cases of boys stealing apples from Orchards on the Bromley borough area in the month of August 1918.

Perhaps the apples were too good to resist, or the boys had a desperate need for food, who knows, but it seems they were willing to travel far from their homes to steal these crops from orchards in Chelsfield, Farnborough and St Mary Cray. There was a hefty fine for being caught at 15s each – at least 2 days wages for a skilled worker! 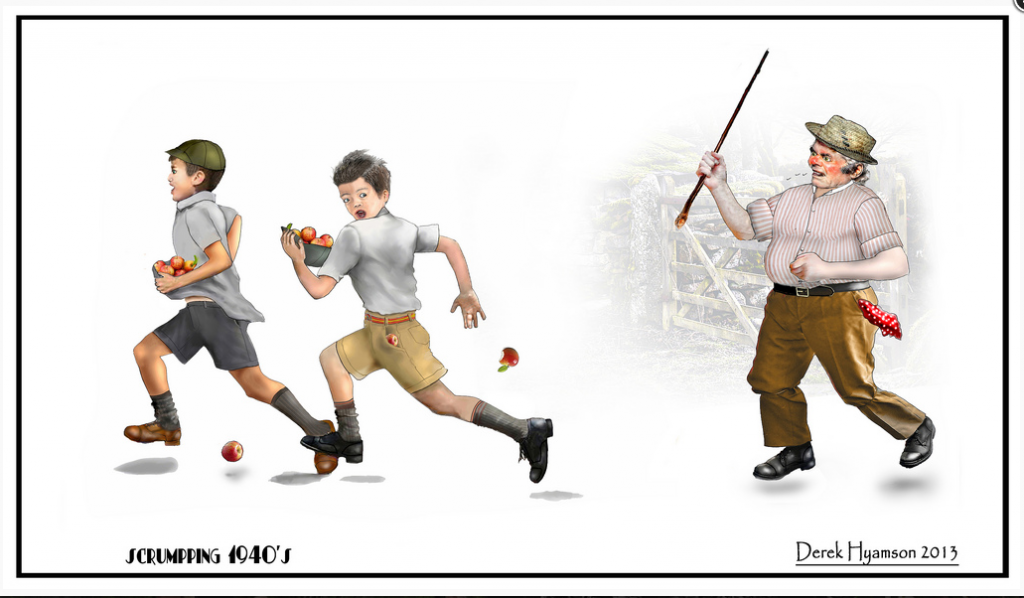 Alfred Kanonick (16), White Road, Spitalfields, fur cutter, and a Russian subject, and Joseph Brown (15), Crispin Street, Spitalfields, hat blocker, were charged with stealing apples to the value of 12s., the property of Joseph Griffin, at Farnborough, and further with wilfully damaging apple trees and gooseberry bushes, value £1, on August 17th. Police-constable Zealey said he saw the two lads in an orchard belonging to Mr Griffin. They were pulling the boughs down with sticks and picking apples off. They did a good deal of damage to the trees. He asked them what they were doing, and they said, “Picking a few apples to take home.” Mr Griffin said there were a lot of apples knocked down and many gooseberry bushes were trodden down. Defendants were fined 15s each for stealing the apples, 13s for the damage to the trees, and were ordered to pay the value of the apples and the amount of damage between them.

John Verrall (17), Guinness buildings, Snowfields, Bermondsey; Joseph Verrall (15) same address; and Alfred James Holmes (17), Prospect Street, Rotherhithe, were charged with having in their possession a quantity of apples suspected to have been stolen at St Mary Cray on August 18th. Holmes pleaded guilty, the others, not guilty. Detective Campkin said that about seven o’clock on Sunday evening he saw the younger Verrall riding a bicycle. His pockets looked very bulky, so witness called on him to stop. He refused, and witness caught hold of him and pulled him off. Witness found the apples in his pockets and Verrall said he bought them off a man over the hedge. Verrall’s brother them came back and he also, had some apples in a bag, which he said he bought at Paddock Wood. Holmes was also stopped by witness, admitted the offence, and was fined 15s. – John Verrall denied stealing the apples. He bought them in two lots, one from a man and the other from two boys, for which he paid 1s 6d. He and his brother halved them – The Bench said they could not accept the explanation, and defendants would be fined 15s. each.

Reuben Vann (15), Hammelton Road, Bethnal Green, was summoned for stealing a quantity of growing apples, value 1s 6d., the property of Mr Alfred May, on August 5th – Police constable Jarrett said he saw the lad in an orchard at Chelsfield. On seeing witness he ran away, but witness caught him and took his name and address – Fined 15s.