Selection of FLOATPLANES from WW1

A floatplane is a type of seaplane with one or more slender floats mounted under the fuselage to provide buoyancy. By contrast, a flying boat uses its fuselage for buoyancy. Either type of seaplane may also have landing gear suitable for land, making the vehicle an amphibious aircraft.

Float planes have often been derived from land-based aircraft, with fixed floats mounted under the fuselage instead of retractable undercarriage (featuring wheels).

Float planes offer several advantages since the fuselage is not in contact with water, which simplifies production by not having to incorporate the compromises necessary for water tightness, general impact strength and the hydroplaning characteristics needed for the aircraft to leave the water. Attaching floats to a landplane also allows for much larger production volumes to pay for the development and production of the small number of aircraft operated from the water. Additionally, on all but the largest seaplanes, floatplane wings usually offer more clearance over obstacles, such as docks, reducing the difficulty in loading while on the water. A typical single engine flying boat is unable to bring the hull alongside a dock for loading while most floatplanes are able to do so.

Floats inevitably impose extra drag and weight, rendering floatplanes slower and less manoeuvrable during flight, with a slower rate of climb, relative to aircraft equipped with wheeled landing gear. Nevertheless, air races devoted to floatplanes attracted much attention during the 1920s and 1930s, most notably in the form of the Schneider Trophy, not least because water takeoffs permitted longer takeoff runs which allowed greater optimization for high speed compared to contemporary airfields.

There are two basic configurations for the floats on floatplanes:-

The main advantage of the single float design is its capability for landings in rough water: a long central float is directly attached to the fuselage, this being the strongest part of the aircraft structure, while the smaller floats under the outer wings provide the aircraft with lateral stability. By comparison, dual floats restrict handling, often to waves as little as one foot (0.3 metres) in height. However, twin float designs facilitate mooring and boarding, and – in the case of torpedo bombers – leave the belly free to carry a torpedo.

Floatplanes from World War One 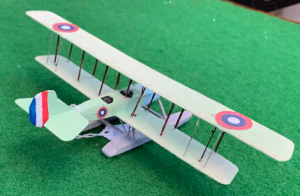 Curtiss R-6 The Curtiss R-6 was a twin float observation plane that was a more powerful version of the earlier …
Read More
error: Content is protected !!