The repercussions of war are as unexpected as they are inexorable and endless.  The latest of victims are our few ancient windmills.  Of recent years about half-dozen of these time-honoured memorials of agricultural England were put back into working order again.  One would have thought that such engines worked by wind alone and needing no fuel to drive them would have been of economical value to the war machine.  Apparently, this is not so.  The Ministry of Food say that owing to transport local milling is not practicable.

Everything else is distributed and spread out to save losses by air raid, why not milling?  Well, they’ve to go and their ancient machinery is to go for scrap iron, what iron there is of it.

Most of the machinery in these old mills is made of timber with rollers of stone.  There is more scrap iron still lying about on a farm not two hundred yards from where I sit now then there is in the whole of the few working mills left in the South of England.

It will be no help to the war effort to destroy these beautiful buildings which also have their educational value.  The amount of scrap will be scarely worth the labour of collecting.

What about the Cobden statue and several others I could mention?  As one architect says, historical gates and grilles of metal are to be preserved so why not preserve these few old mills that are a part of our architectural history.  “Noble sentinels of another age, forerunners of the modern flour mill.”

To destroy them will be more like a panic action than one of zeal or even common-sense. 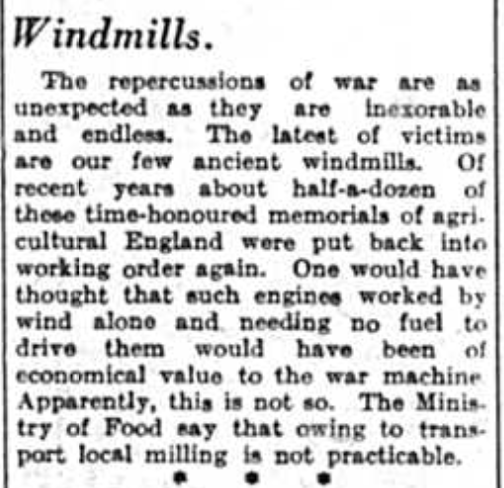 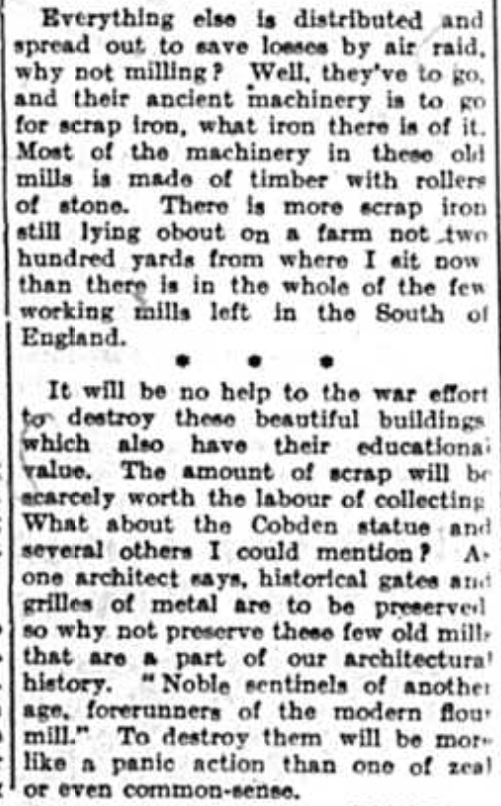