Interest was aroused in Bromley on Saturday by the Wedding at St Mary’s Church, College Road, of Dr. David Noble Dobbie, of this town (now Captain, R.A.M.C.), son of Mr and Mrs David Dobbie, of Edinburgh, to Miss Hazel Eva Margaret Schooling, daughter of Councillor and Mrs Lionel Schooling, of Rosewood, Bromley, and granddaughter of the later Mr and Mrs F. Schooling of Holly Dene, Beckenham Lane.

The bride’s parents are among the best known residents of Bromley, and she herself is a popular member of the V.A.D.

The organist , Mr Leslie Ellis, played appropriate music, including Trumpet Voluntary, Trumpet Tunes, and Minuet (Purcell), Bource (Handel) and “Jour de Noces” (Stuart Archer).  The hymns were “Lead us, Heavenly Father, lead us” and “Lead Divine, all loves excelling.” During the signing of the register, the hymn, “May the Grace of Christ our Saviour,” was sung, followed by Parry’s “Jerusalem” (by request).  Master Jack Aspinell then sang “It is a wondrous sympathy that bindeth soul to soul,” by Lizst.  The Wedding March (Mendelssohn) was played as the bride and bridegroom left the church.

The Vicar, the Rev. W.R. Crichton took the first part of the service, and the marriage ceremony was performed by the Rev. Charles M. Schooling, formerly Vicar of St. Augustine’s Grove Park, and not Rector of Wiston, Sussex.  The Rev. C.M. Schooling is a cousin of the bride’s father.

Given away by her father, the bride wore a dress of periwinkle blue woollen material trimmed with dyed Arctic fox fur, and carried a bouquet of carnations, violets and white heather.  Her ornament was a pearl necklace.

The reception by the bride’s parents  was at the Sundridge Park Hotel, and the toast to the health and happiness of the bride and bridegroom was proposed by Dr. A.E. Grisewood.

The wedding cake was by W.E. Warren and Son, of Masons Hill, Bromley. 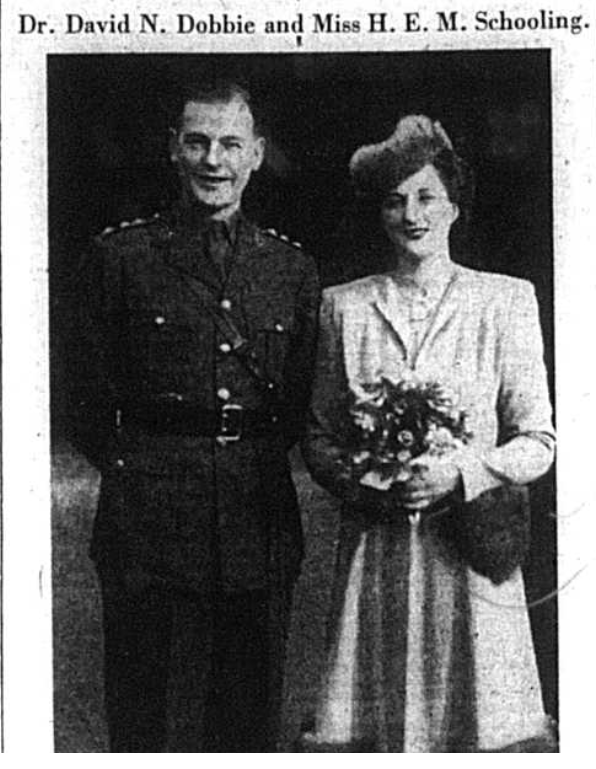