Sergeant Peter David Devereux, aged 22, who has been reported “missing” while on an R.A.F. patrol at sea, joined the R.A.F. before the present war began.  He was in action in France last year and was wounded.

These verses were written by his brother:

Fearless, he joined the legions of the skies;
Dauntless, through the spark that never dies,
Content to serve his country and his friends;
Happy, with the zest that youth extends.

Daily, he dared the dangers of the air;
Keenly kept his watch with buoyant flair.
Tensely, from out the cloud he met his foe,
Grimly, swayed the struggle to and fro.

Briefly they wrote the tidings of no trace;
Bravely did his loved ones pray for grace.
Surely, he is but “missing” from their sight.
For ever, in their hearts he soars in flight. 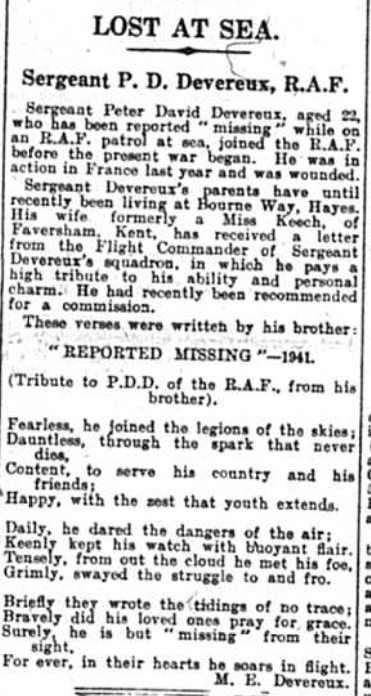