Lieutenant Gerald Edward Combe was the son of Herbert Walter and Mildred Eleanor Combe, of Bromley, Kent.  He was killed in action on the 27th May 1940, aged just 23 years, and is commemorated at Le Grand Hasard Military Cemetery in Morbecque, France.

Lieutenant Gerald E. Combe, of The Queen’s Own, Royal West Kent Regiment, previously missing, is now officially reported killed in action in Belgium in May, 1940.

He was the younger son of Mr and Mrs H.W. Combe, of Elmbank Hotel, Sundridge Avenue, and late of 11 Tweedy Road, Bromley, and was 23 years of age.  He was educated at Carn Brea School and Dover College.

Lieutenant Combe joined the Territorial Force hen he was in business living in Norfolk, and on returning to London he transferred to the Royal West Kent Regiment.

He had a spendid sports reord, was a member of Sundrige Park Lawn Tennis Club, played Rugger* for the well-known Beckenham Club, and had achieved considerable success as a boxer.  In 1913 he reached the Territorial welter-weight fina at the Albert Hall.

Lieutenant Combe’s elder brother Captain H.J.D. Combe, commands the local company of the Queen’s Own Royal West Kent Regiment, and both went out together with the B.E.F.  Captain Combe arrived home safely from Dunkirk in June 1940. 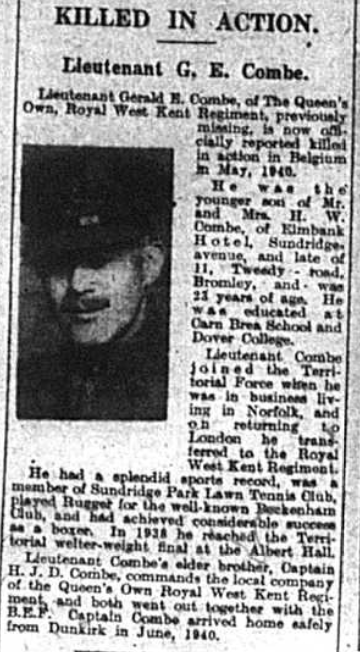 * Rugger is a form of Rugby