Looks like complaints about food waste is not a new phenomenon.  Although it seems comical now, this complaint printed in the Bromley & District newspaper in February 1941 shows a real disgust at the thought of people wasting their unwanted sandwiches!

I dunno. Some people don’t realise there is a war on.

Three times a week somebody leaves a packet of fresh sandwiches in a public convenience in Sidcup.  On the floor, too – so they are to all intents spoiled.

We journalists (hum!) like to weave stories round such incidents.  Is it a man who is earning enough to lunch out but doesn’t want his wife to know?  Is it a crank who thinks his landlady is trying to poison him?

Whoever it is is guilty of an offence against the food regulations.  If he doesn’t want the sandwiches, he should not bring them away from home.  If he ca;t leave them at home he should find some deserving person who will eat them (shouldn’t be difficult in these hard times!)

Don’t waste food, chum.  It makes me and Lord Woolton foam at the mouth. 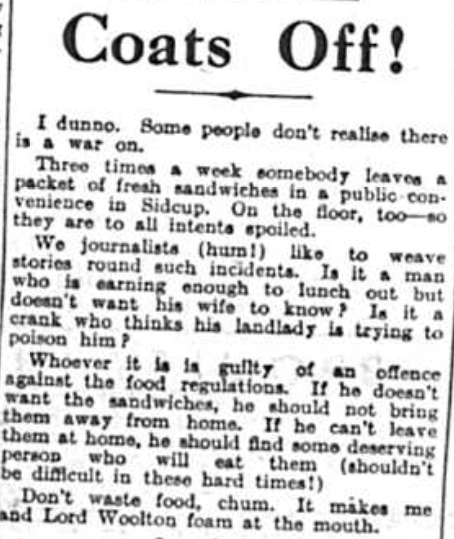