Flying Officer Eric Charles Whitehead was the son of William and Selina Whitehead of Bromley, Kent, and the husband of Cynthia Eva Beatrice Whitehead, of Chislehurst, Kent.

He died on the 17th July 1941 and is commemorated at Escoublac-la-Baule war cemetery in France.

Information has just been received by his relatives in Bromley from the Air Ministry that Flying-Officer Eric Charles Whitehead has been reported as missing after being out on operations with his squadron a few days ago.  here is a possibility, however, that news of him may yet come to hand.

Flying-Officer Whitehead is a member of an old Bromley family, being a son of the late Mr Whitehead and of Mrs Whitehead, formerly of Homestead Road.  Mrs Whitehead sen., is now living with her daughter, Mrs H. Treadwell, at 86 Southlands Road.

Flying-Officer Whitehead who is about 34 years of age, lived with his young wife (formerly Miss Alderton, of Farnborough), at Chislehurst for some time.  They have one child, a baby of five months,  Flying-Officer Whitehead spent six years in the Army with the Royal Corps of Signals in India, but came home about 11 years ago and for several years was chauffeur to Mr H. Humphryes, of Chislehurst, now of Page Heath Lane, Bromley.

When war broke out Mr. Whitehead joined the police, but later volunteered for the Air Force and was called up for service and granted a commission about a year ago.  He had only just recently been on leave. 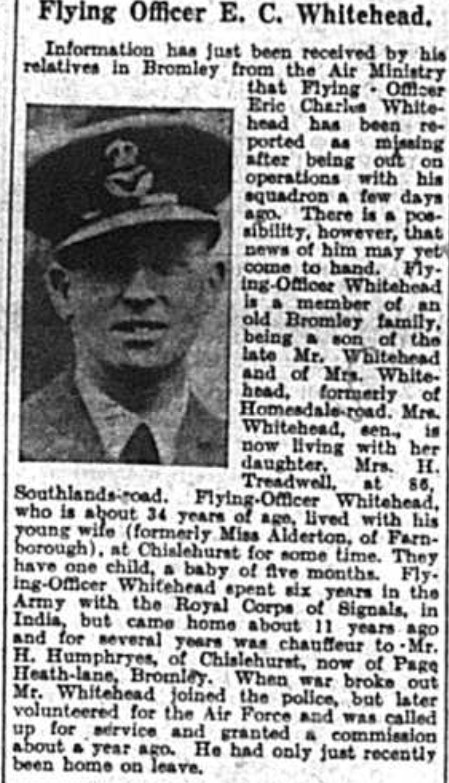