It’s strange to imagine a world without traffic lights, as they have now become a necessity in keeping our busy roads safe and less chaotic.

Before traffic lights, police controlled the flow of traffic using hand signals.  The world’s first traffic light was installed in London in December 1868.  It as a gas-lit signal operated manually by a policeman.  Unfortunately this model had limited success, as less than a month later it exploded after it was implemented, injuring its operator.

The more modern electric traffic light was developed in 1912 by an American policeman, Lester Wire, who used red-green lights.  The traffic light system developed quickly in America after this, with the first traffic lights returning to Britain in 1926, being deployed at Piccadilly Circus in London.

By the 1940s, traffic lights installations had spread around the country, but, as this article from the Bromley & District Times newspaper explain some were found to be causing issues when in use during daylight hours.

Nearly 50 people were summoned at Bromley police court this week for disregarding traffic signals.  That is not nearly so much a wilful disregard of highway rules as might be thought.  The real trouble is with the signals themselves, which behind their very much restricted apertures are scarcely visible in daylight and are practically invisible in strong sunlight.

In the dark they are plain enough, and as the only object in cutting their visibility down was concerned with restricting the amount of light they could emit after dark, there would not be much point in permanently restoring more of that light and bringing into play a different sort of danger.

A year ago the Bromley Council asked the Ministry of Transport to approve an adjustable mask, but the Ministry would not do this unless they were generally adopted.  So far as it known there has been no general move in that direction, but it is understood that the Kent County Council intend to fit these mask in the County Police area, which seems a good enough argument for fitting them in the metropolitan area, where the daytime traffic, and consequently the danger in over-running signals, is much greater.  At any rate, Bromley Council are to renew their application. 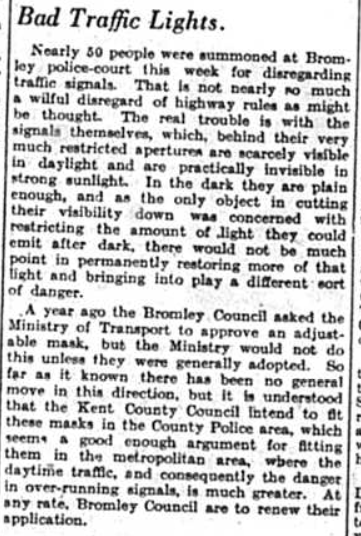