In June 1940, Mrs Smith, 58 Freeland Road, Bromley, received news that her husband, Lieutenant A.J. Smith, The Buffs, was missing, believed killed.  He was serving in France in May of that year, and when last seen was wounded.

A communication has now been received by Mrs Smith stating that her husband is presumed to have been killed in action in May 1940.

Lieutenant Smith, the son of Mr. W. Smith, 28 north Road, Bromley, served in the last warm and was wounded.  In 9123 he rejoined the Army and was Company Quartermaster in the Highland Light Infantry until 1939, when he was commissioned on the field.

Lieutenant Smith is reported to have died on the 20th May 1940, aged 45 years. He is commemorated on the Dunkirk Memorial. 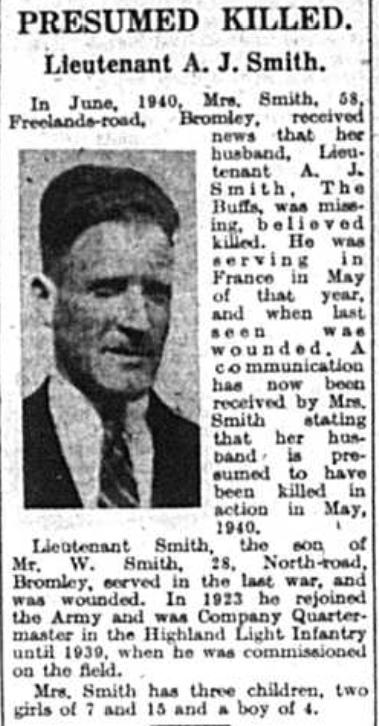